Our 3rd demand is that: UC and UC San Diego divest from fossil fuels and quit all fossil-fuel related banking.

There are several aspects to this including: A. UC-wide divestment of the endowment and the pension, B. Faculty/staff divestment of 401K/403B, C. Encouraging UC San Diego to shift its banking away from corporations that finance the fossil fuel industry, D. Chase bank off campus.

An essential part of the climate crisis movement is to make institutions divest their holdings in fossil fuel funds. In July 2019, after a years-long campaign started by the students, a majority of voting faculty on all 10 campuses approved the memorial that specified divestment from fossil fuel funds held in the UC Endowment. See here for the campaign website. On Sept 17th 2019, UC financial officers apparently announced their intention to divest the endowment AND the pension of all fossil fuels [The UCSD Guardian carries the overall story here.].

In May 2020 the Chief Financial Officer announced that UC is now “fossil free”. While this was hailed around the world as a victory, our analysis is that this represents derisking rather than divestment: the words of the CIO can be interpreted to mean that as soon as conditions are favorable he might buy back fossil fuel related investments. Further, without transparency, we cannot evaluate the claim that UC is “fossil free”. In fact, very many stocks and bonds are exposed to the fossil fuel industry, and getting this right is tricky. We are now working to request Transparency from the CIO. See more here.

In October 2020, Institutional Investor published a story showing that UC still part-owns companies such as Halliburton. It’s time for real transparency from the UC, as requested in this academic council memo, and better still, for the Regents to take a moral position on full divestment, including for banking and insurance.

B. Divest Yourself! Put your retirement savings to good use!

Most retired career UC employees receive their benefits from the Pension Fund addressed above. Career UC employees may also contribute to 401(a), 401(k), 403(b) and 457(b) tax-deferred savings plans. If you have one of those accounts, it is probably invested in a fund that gets a D rating from Fossil Free Funds, but we show you here how to move your investments to a B-rated fund. Of course, we all want to get ‘A’s, so GDP is demanding that UC offer A-rated funds and make them the default.

At the end of 2019, in the US there was about $20 Trillion dollars invested in IRAs and employer-sponsored retirement plans like those above. About $13T of this is in stock funds. Let’s put our money where our mouths are and inspire a nationwide Divest Yourself movement!

C. UCSD’s money should not be used to destroy our future! Use a responsible banker!

Averting devastating climate catastrophes requires that most identified fossil fuel reserves remain in the ground, yet major banks are providing massive funding to enable their extraction. A recent report[1]examined the fossil fuel investment policy of 35 major banks. In the 4 years since the Paris Agreement was adopted (2016-2019), they have lent $2.7 trillionto enable further exploitation. UCSD banks with the Bank of America. In the past 4 years, BofA has provided $157 billion in financing to fossil fuel companies, making it the fourth largest financial enabler of fossil fuel extraction in the world. It led all other banks worldwide in its increase in fossil fuel financing from 2018 to 2019. The analysis also examined banks’ specific investment policies in some of the most polluting sources: tar sands, arctic and offshore oil, fracking, LNG, and coal mining and extraction. BofA scored about 5 out of 200 points, the worst of all American banks examined (see chart on page 12 of footnote 1). In short, BofA takes the money that UCSD deposits, and leverages it to underwrite enormous loans that are crucial enablers of the destruction of the future planet we will inhabit. Is this wise?

It is likely that no bank which is large enough to service UCSD or UCOP is taking the climate emergency seriously enough. However, BofA is one of the worst. We demand that VC Ouillet issue a competitive call for proposals from banks to provide commercial banking services to UCSD, indicating how the bank’s fossil fuel investment policies and actions will be incorporated into the decision criteria. We demand that the Regents address the same issue at the UCOP level.

In January 2020 UCSD GND launched the Chase Them Out campaign, this has been covered in the Washington Post, see our events page.

We have also generated a petition for ethical leasing of space in the Price center, see here.

Green New Deal at UCSD2 weeks ago
Reminder that our Town Hall on Transit is next Wednesday from 3-4:30pm. See you there!

Green New Deal at UCSD2 weeks ago
Our allies at SanDiego350 and East County BIPOC are organizing a protest at Sempra Energy's Shareholder Meeting (SDG&E's parent company) this Friday, May 13, at 9am, at 488 8th Ave, SD, 92101.

Please join in solidarity if you can and advertise widely. Thank you!

Green New Deal at UCSD3 weeks ago
We stand in support of those organizing a Roe v. Wade rally on Friday, in protecting the right to bodily autonomy.

Healthcare intersects so much with the climate crisis and a Green New Deal. Marginalized groups are disproportionately at risk of climate impacts worldwide, and lack of healthcare, including access to abortion and reproductive care, is a key part of political marginalization and at-risk status. There are so many connections between radical environmental organizing and abortion rights.

See you on Friday in front of Library Walk at 12pm! 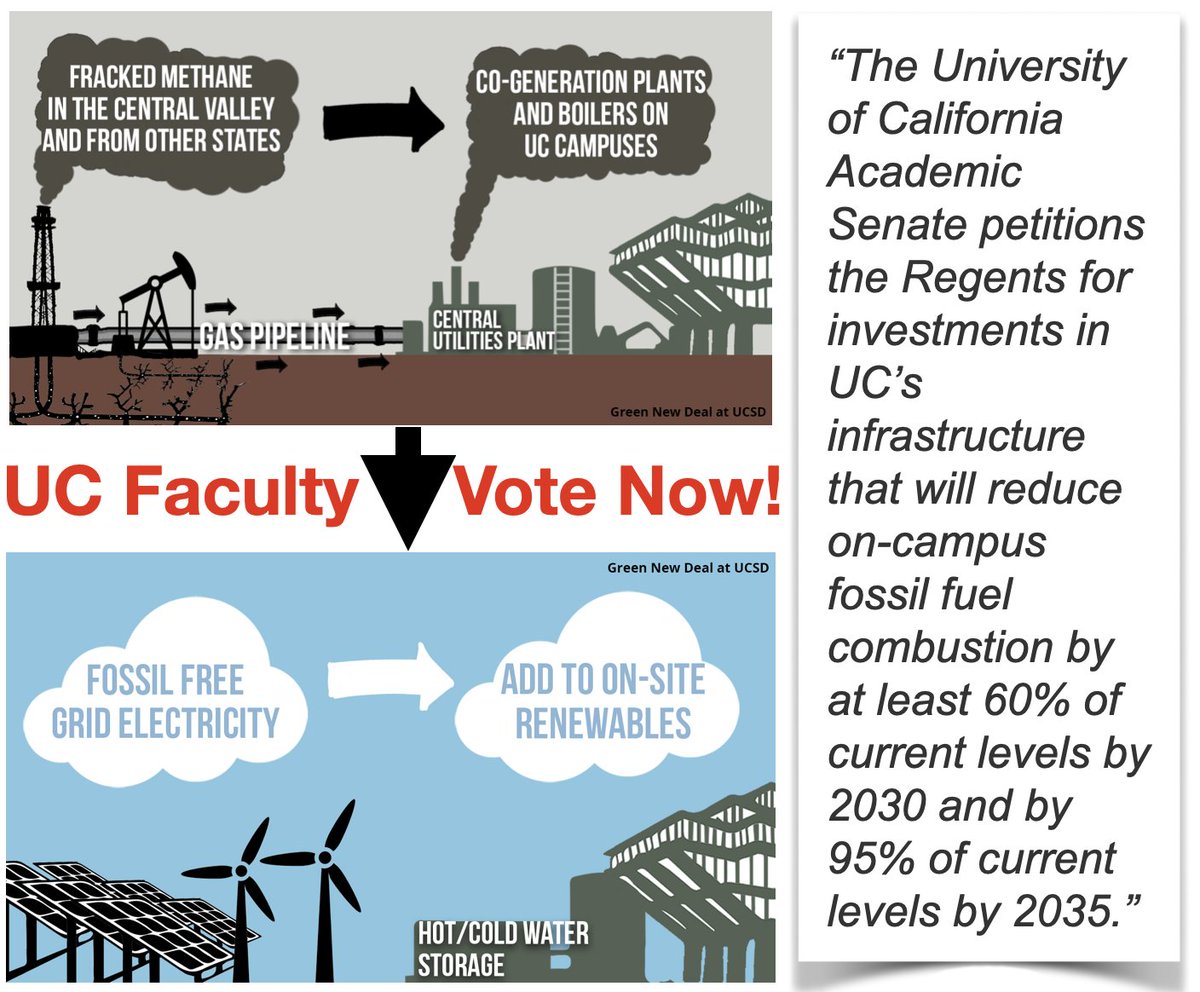 UCSD Green New Deal · 4 days ago
@ucsdgreennewde1
"Large polluters are arsonists of the biosphere" - UN Secretary General.
Today we marched on the UCSD Chancellor's office.
We told him to stop burning fossil gas & to switch the campus to renewable electricity.
Thanks @SanDiego350, @SunriseMvmtSD and @FracksOur for joining! https://t.co/kpgGJjTbRB
View on Twitter
8
17