The University of California is the biggest employer in the 5th biggest economy in the world. We want our new UC president to be a model for the whole world, by leading on real DECARBONIZATION not fake “carbon neutrality”. Add your name and share with 20 people: https://forms.gle/cHtvXhp2Xfp2bgg17

Join us Friday, October 4, from 4–6pm at the Natural Sciences Building Auditorium for the First Friday meeting to organize and plan further actions and campaigns to advance the UCSD Green New Deal!

The UCSD Green New Deal movement is organizing a community of students, staff, and faculty to press the university to be a leader in addressing the climate crisis—and we’re looking for YOU to join us and help shape a series of campaigns to make it happen.

The first action is the:

On September 27th, we will be walking out of our workplaces and homes to demand action on the climate crisis. Join us at UC San Diego!

We are advocating for UC San Diego to:
1) Teach your students about climate change and climate justice
2) Specify and meet carbon neutral goals by 2025
3) Build a UC-wide Green New Deal

TLDR: The world isn’t waiting. Neither are we.
September 27th.
March for Climate Action.

Sign up for the march on Eventbrite or Facebook, share the invitation with at least ten of your UC San Diego-affiliated friends, and contact us if you have questions or want to get involved on a deeper level!

Following the Climate Action March, the first meeting of the UCSD Green New Deal movement is October 4th (and will continue to meet the first Friday of every month, in addition to direct actions and other efforts). Sign up for our email list or follow us on social media to stay up to date and get involved!

Green New Deal at UCSD
Our voices are being heard! Check out the article about the UC Riverside Townhall regarding the search for a new UC President. https://www.highlandernews.org/37227/uc-board-of-regents-hosts-first-town-hall-forum-to-search-for-next-uc-president/

Highlights include: Associate Director of Sustainability Brian Siana voiced the urgency of the climate change and called for the next UC president to acknowledge and take immediate action to reduce carbon emissions in the UC system.

UC Board of Regents hosts first town hall forum to search for next UC president - Highlander
On Thursday, Jan. 16, the UC Board of Regents held the first town hall open forum for students, faculty, staff and stakeholders to voice their thoughts on the selection of the new president of the University of California. The event was held on campus in HUB 302. Following the announcement that UC P...
highlandernews.org
3    View on Facebook

Green New Deal at UCSD
Our allies in the American Federation of Teachers are holding a rally on Feb 3rd. Head along and stand in solidarity with them! This is the time to show your support for UCAFT Lecturers in our continued labor struggle, in our collective effort to bargain fair contracts for us all.
UCSD Lecturer Contract Expiration Rally Information
WHEN: Monday, February 3rd at 12:30pm
WHERE: Rally at Silent Tree outside Geisel, March through Price Center to Chancellor's Complex
RSVP: https://docs.google.com/forms/d/e/1FAIpQLSfc3ttm6ZLdvTb-7KzNgOTLSwvzqYACNDou3kDVFHPxLnKtQw/viewform?usp=sf_link&urp=gmail_link

Please mark your calendars for the rally, RSVP, show up, spread the word, bring your students, colleagues and community out to the rally and march.

Lecturer Contract Expiration Rally
Join us Monday, February 3rd at 12:30pm at The Silent Tree for a rally and a march through the Price Center to deliver our signatures and core demands to the Executive Vice Chancellor! We will have speakers from various groups across campus! Program coming soon! You will not want to miss this event....
docs.google.com
1    View on Facebook

Green New Deal at UCSD
Interested in volunteering? Want to promote us with tabling and flyering?

We'll be tabling this Wednesday at the Winter Org Wilderness (WOW) Fair on Library Walk from 11-5 PM, and we need all the help we can get at this important campus event! If interested, please sign up for any time you can volunteer on this spreadsheet: https://docs.google.com/spreadsheets/d/1OkAZAM9KFn_kSDo_fcPXBz_GSeUqa9-hPGjSYHZuqiE/edit?usp=sharing

If you can't make it that day, you can still sign up to flyer/table on Library Walk for other times this week on this Doodle poll: https://doodle.com/poll/3n8b4gkww6qgkhnn And please comment on this post or DM us that you signed up so that Lilia will contact you about what your next steps are!

Google Sheets - create and edit spreadsheets online, for free.
Create a new spreadsheet and edit with others at the same time -- from your computer, phone or tablet. Get stuff done with or without an internet connection. Use Sheets to edit Excel files. Free from Google.
accounts.google.com
1    View on Facebook

36 #UC orgs and over 2400 student/staff/faculty signed petition for @UofCalifornia Board of Regents to prioritize #ClimateChange in the selection of new UC President. 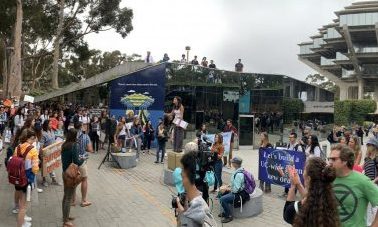 #UC Board of Regents: Next UC president must lower 📉 GHG and create #sustainability model 🔜 #UCSD Let's make sure this is done! #WednesdayWisdom https://t.co/6xsXOMKFzx
View on Twitter
2
1

Remarkable report with striking graphics from McKinsey. It chartsthe risk of extreme heat in India and other case studies over next 3 decades, from future of food supply in Africa to the economic impact of rising sea levels and devalued houses in Florida https://t.co/0jrJlPFLyb
View on Twitter
1
0