Dear Executive Vice President of the UC (Rachael Nava) and Fellow Members of the UC Community,

Thank you very much for meeting with us (on Dec 11th) and engaging in a highly productive discussion regarding how to accelerate UC’s climate action. We came with three asks: 1) Make detailed ‘shovel ready’ electrification plans for the campuses with co-generation plants; 2) Change the language and goal from Carbon Neutral to Fossil Free, 3) Partner with us to present these new ideas to President Drake.

We were so gratified to see the beginnings of a consensus around developing actionable electrification plans for the campuses; plans that would then be ready for financing from Federal Green Recovery funds, or State or philanthropic funds, as so clearly stated by Chief Financial Officer Brostrom. There also seemed to be much agreement that a reframing of UC Climate Action is in order, reflecting its evolution from Carbon Neutrality (with an implied emphasis on offsets) to Fossil Free (with an emphasis on real emissions reductions on the campuses).

We look forward to hearing from you early in January regarding the results of your consultations with your climate action team, and we also look forward, soon thereafter, to jointly presenting this new vision to President Drake.

On behalf of those of us who met you last Friday, the 3500 signers of the UC Energy System Petition, and the UC Green New Deal Coalition.

Much has been written about the problem of denial of climate change science. But the University of California exemplifies another, possibly much tougher, problem: How do you go from acceptance of the science to action?  … read more here.

The UC is using some of the worst banks and the worst insurance companies when it comes to fossil fuel industry exposure. We need the UC to respond to our request to shift banking, see more here.

In May 2020, Baccher said in a Regents meeting: “…I’m happy to announce that, actually as of today, the endowment, the pension and all of our working capital pools are fossil free at the University of California. In fact, you could extend that to say that our 125 billion dollars of assets are fossil free.”, see minute 17.36 here.

Green New Deal at UCSD3 weeks ago
Green Corps is looking for college graduates who are ready to take on the biggest environmental challenges of our day.

Their program starts by putting you in an intensive classroom training. You learn about issues and campaigns, organizing theory and principles, and skills from recruiting volunteers to staging a media event. Then, you move to a more hands-on experience. You make a difference on important campaigns to transition our country to clean energy, protect wildlife, and more. For example, Lauren Karpinski, an organizer from the Green Corps Class of 2019, brought together a coalition of 40 groups that helped win a landmark solar energy bill in Arkansas this past year.

Green New Deal at UCSD1 month ago
Get a brief insight on how climate change may impact our health by watching this short 3 minute video.

There is more than one way climate change can impact our health and the quality of life we may be able to lead. From wildfires to CO2 emissions and plastic pollution, climate change is impacting our health today and will do so even more tomorrow making a top priority issue everyone should get involved in.

Our last Third Thursday CAFE of the quarter is this Thursday from 8-9pm PST.

We are excited to have guest speaker Dr. Kristina Mendez from UCSD CAPS to discuss our own relationship with nature and how capitalism and colonialism impacts our wellbeing. The holidays can be a stressful time, and in combination with this year’s events, it’s important to evaluate our own feelings and interactions with the climate crisis.

For Zoom information, sign up to GND at UCSD’s mailing list via the link in our bio! We hope to see you there, and we wish you a happy holiday season!

UCSD Green New Deal @ucsdgreennewde1
4 days ago
The UC Regents are meeting this week.
Public comments are being made.
Here's one, asking them to change the climate action goal from CARBON NEUTRALITY to FOSSIL FREE!
#UCGetOffTheGas https://t.co/t99qmLbgyr
View on Twitter 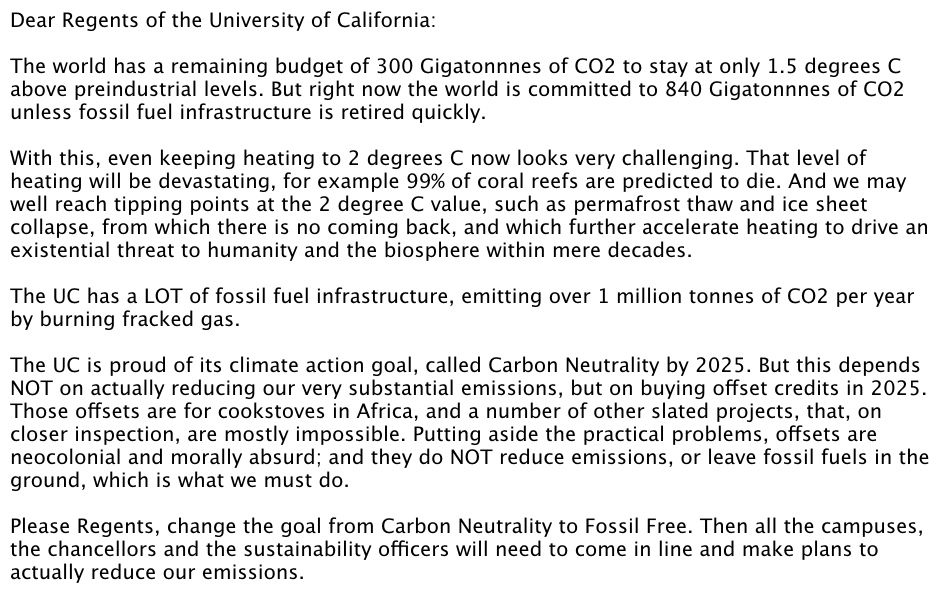 UCSD Green New Deal @ucsdgreennewde1
1 week ago
Allies in the University of California, please help.
A super concrete thing you can do - sign up NOW to speak to, or write to, the Regents.
We need the Regents to set goals for the UC to get off fossil fuels; for energy systems and for finance.
#UCGetOffTheGas @UCGreenNewDeal https://t.co/GY18KKI81v
View on Twitter 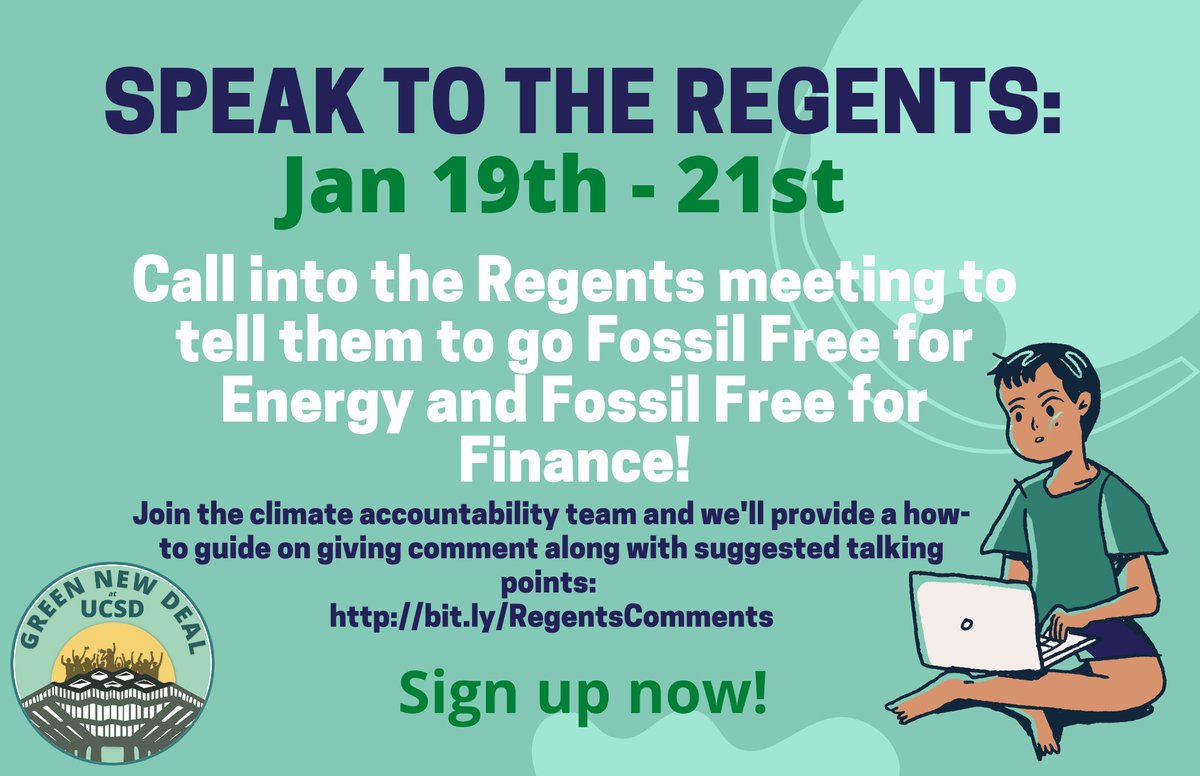 UCSD Green New Deal @ucsdgreennewde1
2 weeks ago
In 2020 in the US alone, twenty two weather-related disasters each cost more than US$1 billion
https://t.co/Sc4QnGY77v https://t.co/YtvrKgoQX4
View on Twitter 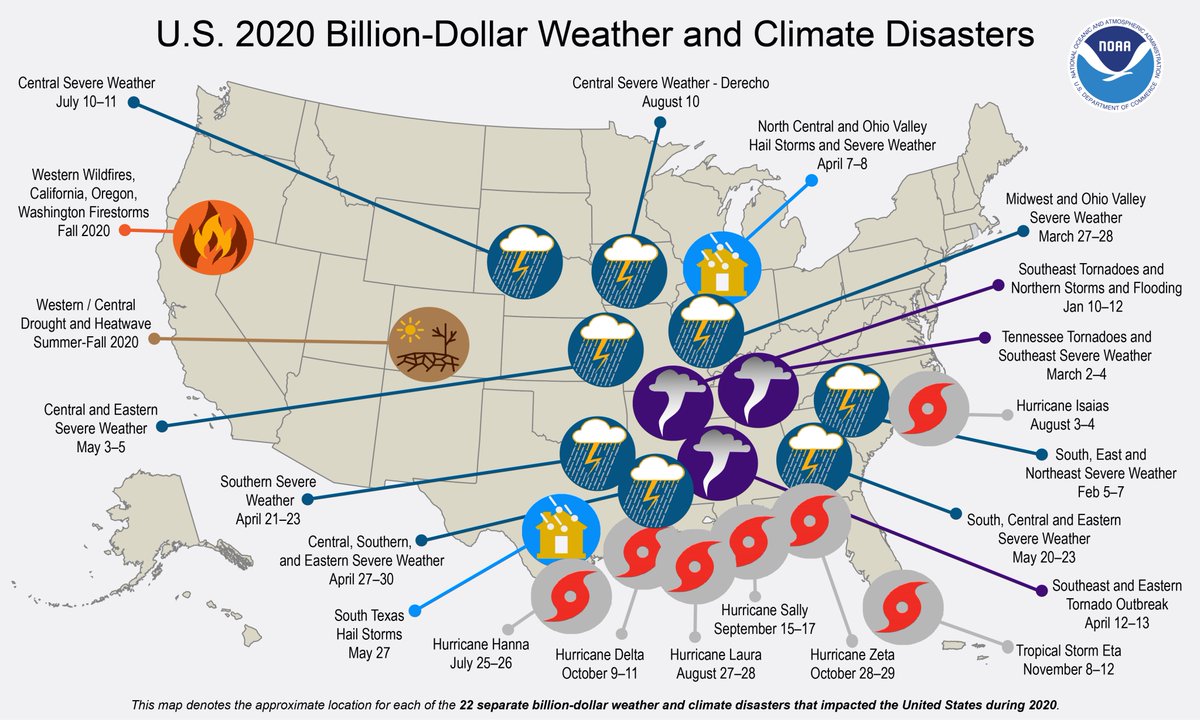